Voyage of Kepler 186 - A journey close to an end

Hello there!
It has been a long long time coming but after much delays 'Voyage of Kepler 186f' will be available on the PSM store to download. The game has been approved and is in preparation to be released! The game will be available in all territories US, Europe and Asia.

Voyage of Kepler is a first person shooter / adventure game where you play as Jonathan Parker a NASA astronaut who is sent on a mission to an exoplanet to ensure survival of the human race. As Earth is all but dried up of its resources from years of human transformation and increased Co2 emissions it has become a dying rock with its time ticking away. So your mission simple seek Earths twin, but not all is as it seems.

So why the long delay?
In the screenshot below in the status history, we can see the submissions I had sent along with the responses from the PSM QA team. Initial version 1.0 all the way up to version 1.10. Due various in game bugs that I had missed during my own testing sessions, the QA team kept rejecting the application due to various bugs from poor programming practices like invoking and creating unused objects to simply forgetting to change the config controls from PC to Vita controls..well the experts do say "never test your own software". 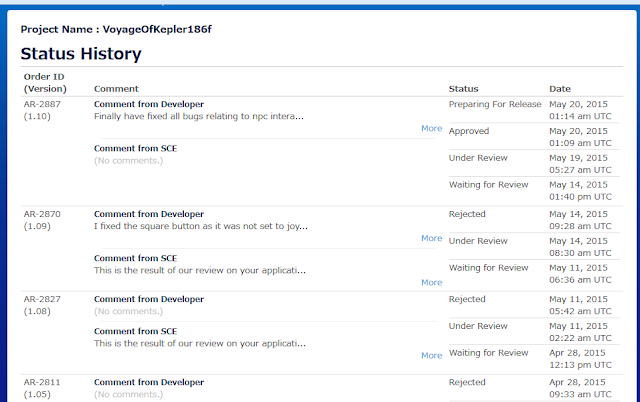 In all what did it take to get the game to be released on the Vita? Oh only about 5 resubmissions and around 11 months of work on and off from sound design to making 3D models to designing levels, scripting, integration of different components and most important of all being persistently committed towards competing the project.

But wait you may ask, "Junaid that's very nice but I don't have a PS Vita so how can I play the game?" don't just turn back yet..

Yes Android!, I am currently also porting the game to the Android platform mainly for tablet devices as the screen size is much better with the control scheme. Below is an early look at the game running on my tablet with a virtual control scheme. 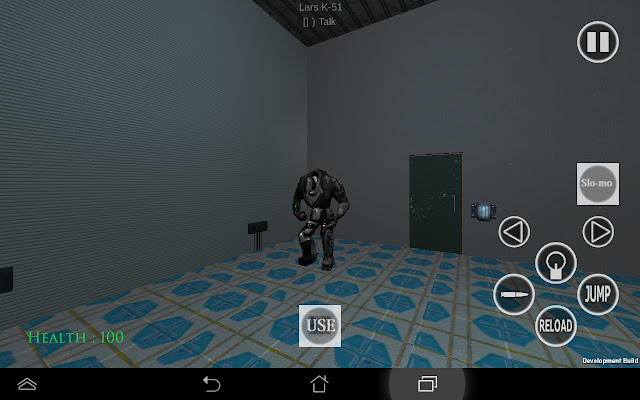 Whats the difference between the two versions?
The Vita version is the perhaps the better version due to the fact that it has physical controls like a regular controller with R1, L1 and analog sticks. On the other hand the Android version has touch controls which can get a little getting used to. However the Android version will be out much sooner perhaps in two weeks time.

Thank you for taking the time to read this, leave a comment, like or share with your friends and if you if you have a Vita check the game out !
Posted by Junaid Malik at 10:06

If you enjoy this blog check out my other blogs.